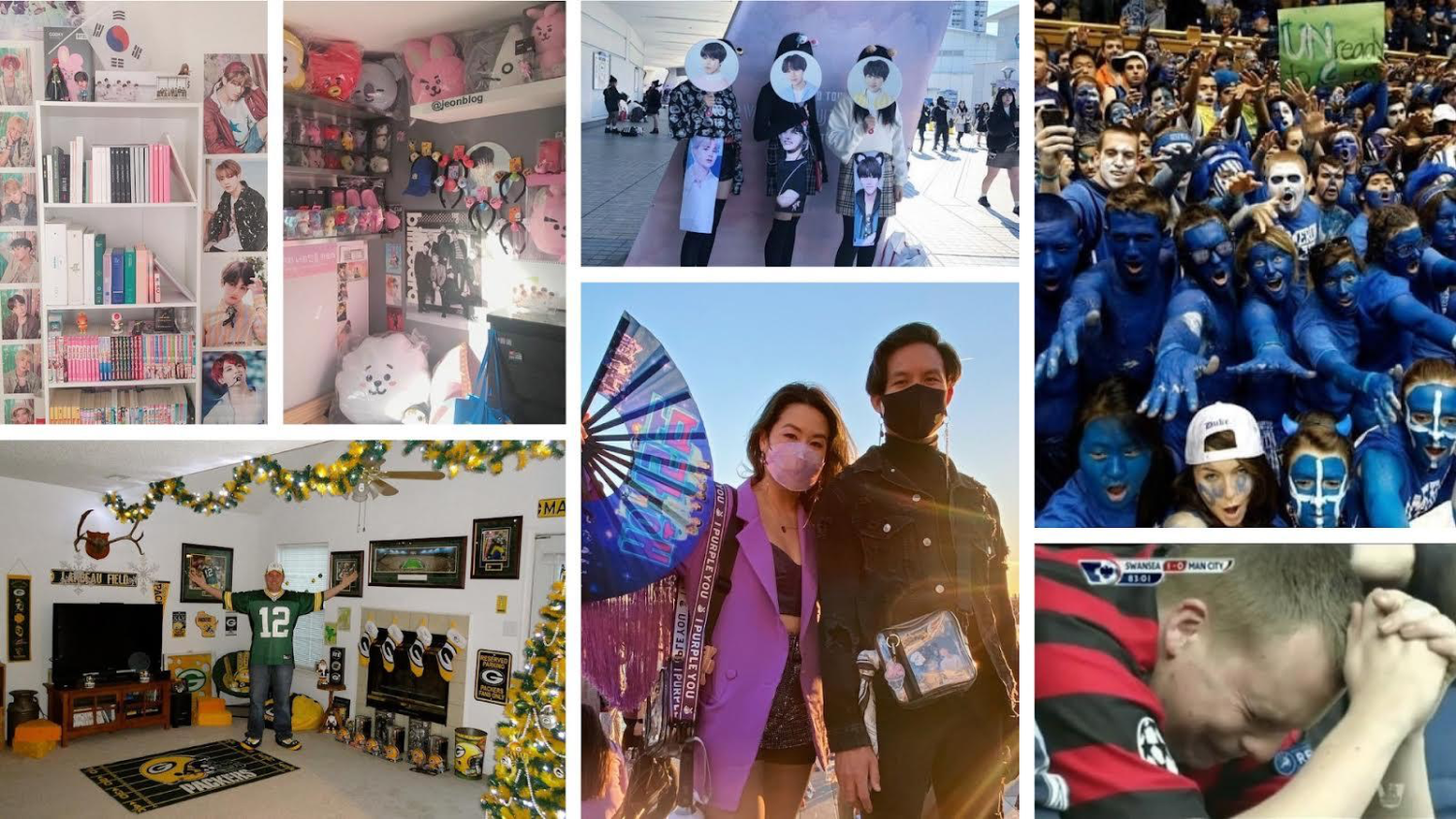 A community that arises with fans that share a common interest is known as a fandom. This fandom can be for a book, band, TV show, sports team, and many other factions. Participants come to critique, consume, or engage with this content. This is one of many strands linking fandoms together. This article will be focusing specifically on a sports team, a boy band, and their fandom.

A sports team and a boy band have many things in common with one another. They both entertain large crowds by showcasing their talents, practice and train for their careers, which typically have shorter lifespans than other professions, and have some sort of social media presence or engagement.

Similarities also extend to their fan bases. The sense of community they build within each other, spending money on merchandise and events, dressing up for games/concerts, the intense loyalty and passion fans feel, attending games/concerts, screaming fans, organized fan chants, and even getting emotional towards the team or artist.

So where does the true difference stem from? Gender.

These two entities are aimed at and consumed by a specific demographic. Sports are a male dominated interest, as in general, more than 50% of their fans are male. Take a look at these charts from Statista. The first is the Share of Sports Fans in The United States as of May 2022, by Gender. 39% of avid fans are male, while only 13% are female. 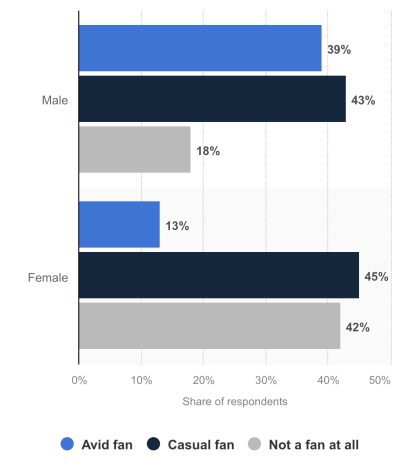 In the second, titled Share of sports viewers worldwide* as of August 2019, by gender, 76% were male and 22% were female. 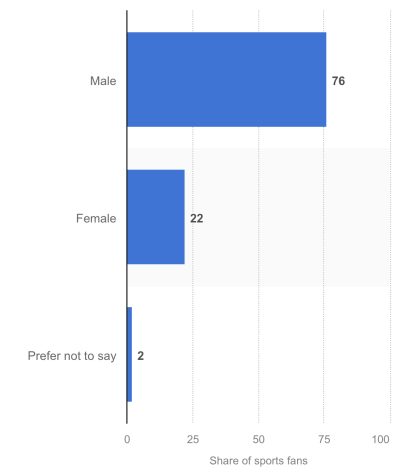 Boy bands are female-dominated. Take a look at these age and gender demographics for BTS’ 2020 Map of the Soul ticket sales (Courtesy of Reuters). Females 25 and up were 46% of web traffic, and 31% were male.

There is nothing wrong with being either sex and engaging with the interest that you love. However, there are double standards that unfortunately come with being a part of a specific group. Sports fans are accepted and boy band fans are separated despite their overwhelming amount of overlapping similarities. This stigma is linked to gender.

The Beatles, who are now considered one of the greatest artists of all time, weren’t taken seriously in their prime because of the fact that they were a boy band. They were invalidated because the majority of their fan base were teenage girls. People didn’t decide they were one of the greats until men decided they liked them too.

“Those who flock round the Beatles, who scream themselves into hysteria, whose vacant faces flicker over the TV screen, are the least fortunate of their generation, the dull, the idle, the failures,” wrote Paul Johnson in a 1964 New Statesman article, titled The Menace of Beatlism.

The Los Angeles Times has an article, compiling all the things critics wrote about the Beatles in 1964. For example, on March 2, 1964, the Nation wrote, “The full house was made up largely of upper-middle-class young ladies, stylishly dressed, carefully made up, brought into town by private cars or suburban buses for their night to howl, to let go, scream, bump, twist and clutch themselves ecstatically out there in the floodlights for everyone to see and with the full blessings of all authority…”

A lot of the reviews honed into the fact that the Beatles fan base was primarily teenagers and young women, and therefore, the band was looked down on.

These examples are all from the 1960s, but it continues to occur today. There are multiple instances of social media users commenting on how they perceive boy band fans. The common denominator in all of these comments is the mention of gender.

However, in that same regard, sports team fans are praised for their extreme dedication to the game. Sports are often associated with masculinity, and the hyped emotions sometimes turned to violence displayed by these male fans are culturally accepted as the norm. It’s simply ‘a part of the game.’ But females are shamed and ridiculed for showing these same emotions often at a lesser level. It is not acceptable for these girls to be excited over their interests, yet sports fans have a history and prevalence of violence.

In a Ted Talk, playwright Yve Blake brought up the sexist history behind the word hysterical. She stated, “…in the 19th century, hysteria was considered to be a legitimate female disorder that could be diagnosed by a doctor if a woman displayed excessive emotion or difficult behavior. The word ‘hysterical’ comes from the Latin word ‘hystericus,’ meaning ‘of the womb,’ because it was thought that this condition was caused by a dysfunction of the uterus. And so, a treatment for hysteria was a hysterectomy. Which is what we still call a removal of the womb.”

She then went on to say, “Because, I want to know, if girls grow up in a world where words like ‘crazy’ and ‘psycho’ and ‘hysterical’ are casually used to describe female enthusiasm, then how does that shape the way that those girls get to see themselves? And if girls grow up in a world that tells them that they are designed just a bit crazier than the boys, then isn’t that a little bit like telling them that they are born less capable of rationality than men, less capable of reason, and unworthy of the same intellectual respect as their brothers?”

It is incredibly interesting how most male-dominated interests such as sports are considered real and mature, but a mostly female-oriented one, such as a boy band are often considered childish, fake, and embarrassing to like. There are female sports fans, and male boy band fans, and yet the only ones invalidated are the boy bands purely because of gender majority and association.

How is it that a man who enjoys their favorite sports team, goes out to see games, and even has that team’s memorabilia in their home any different than a woman boy band fan who likes listening to their music, buys their merchandise, and goes to their concerts?

The imbalance is clear. A user on YouTube commented, “…individual fans are teased on social media with ‘oh, you must be a 12 year old girl…”

And it is so disappointing to see how this is used as a derogatory term. The comment is condescending because it implies that a twelve year old girl is not worth having a valid opinion and young girls take the bait every time. Their responses to those statements aren’t, “so what if I am a twelve year old girl?” No, they point out how BTS has a diverse fan base made up of people of different ages and gender. And while that fact is great, it’s disheartening to see that these fans felt they needed to explain there are older males within their fan base for their interest to be seen as valid.

Why is it that the gender demographic of a fandom dictates how they are perceived? Why can’t teenage girls or women in general be taken just as seriously as men? Why has this internalized misogyny continuously gone unnoticed and without correction? When will we begin to respect the interests and opinions of women in this world just as valid as men? Why are women being ridiculed for enjoying something that makes them happy?

The derision of fangirls has existed for decades and may continue to in the future. However, women are worthy of the same respect as their male counterparts. It is time for their interests to stop being valued as less than. “By brushing these girls aside and laughing at how stupid whatever they like is, we tell these young women that their interests are less important than what men like,” critic Sandra Song wrote on Pitchfork, “That their feelings somehow become discredited and are not ‘real’ by virtue of who is having them.” Block out the incessant criticism and be enthusiastic about what you love.