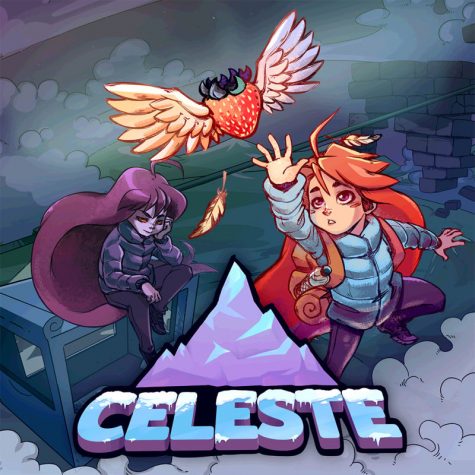 Celeste is a game about climbing a mountain.

That first sentence is the simplest way you can describe this game, and this game is simple in nature. This game came out January 15, 2018 and was created by Matt Thorson and Noel Berry. In less than a year this game has been praised for its platforming gameplay, its story, and everything else about it. Lets find out why!

First off, this game is a platformer through and through. When you start the game you are taught three moves right off the bat. You can jump, climb, and dash. Though that move-set might seem limited at first the entire game is created around it and does many very creative and unexpected things. The dash, it’s exactly what it sounds like, a short boost of speed in any direction. Climbing is, you can grab on to walls and move up and down, but you only have a certain amount of stamina before you fall off. And finally the jump- its a short or long hop depending on how long you hold the button.

In the first level of the game, the game introduces the first gimmick- platforms that when you jump on them, they will move on a track very quickly in one direction. Your first instinct is to get off because something bad might happen but when you jump off of it, you get a huge boost in the direction the platform was going; this is meant to teach you about momentum. In the game you can use momentum in many ways. For example, if you jump off of any moving object in the same direction the object is moving, you get flung further than you would if did a jump on a not moving platform. 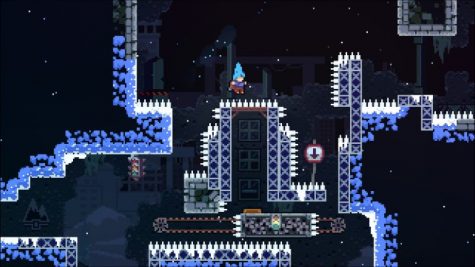 Each level in Celeste follows a specific format, introduce gimmick one, introduce gimmick two, mix the two gimmicks a little, and then long challenge. For example in the second level you’re introduced to the dream block. What thee dream block does is, when you dash into it your dash will take you all the way through the block, in a straight line in the direction of your dash. It will also restore your dash and stamina when you come out the other side.

In the level you also have keys, these act as checkpoints of sorts. You pass through a set amount of them in the room and once you get all of them it moves a block to a different place so you can progress. Each of these gimmick has its own section to teach you how to use them in different ways. At the end of the level it all culminates into one long section using all of the gimmicks you’ve learned throughout the level. It might seem hard now but when you play the game, it teaches you well enough, things that seemed impossible, you’ll be flying through in a matter of minutes.

First off I won’t tell you what the story is yourself, that is for you to discover yourself. I will talk about the meaning though. In the game you learn about depression and how to deal with it. I know it might be a bit heavy but the game tells you not to give up and as you hit the breaking point in your will to play the game and the game stops you for a second. You’re told that you can do this that you should be proud of yourself for getting this far. You can take as long as you need to do it. The story is amazing in every way and is something you should experience yourself.

The creators of the game didn’t want the game to be composed by just anyone, they wanted it to be made by someone who connected to the story. That person was Lena Raine. Lena created the soundtrack to fit around the story and suck you into the game. One thing the music does is, it helps you get into the state of flow. Now flow is when you are fully immersed and have the feeling of energized focus on the task. The music in the game isn’t too heavy and isn’t too soft, it’s just perfect so that you can sit and focus on the game.

This game is a wonderful game and I highly recommend it. Its gameplay is masterful in its execution. The way the game teaches without telling is something all games should aim for. Lastly, its story touches the heart. The way it touches on anxiety and depression can hit home with anyone.