Witches Walk Among Us

Traditional religions are falling out of favor among teenagers yet are they still searching for spirituality. 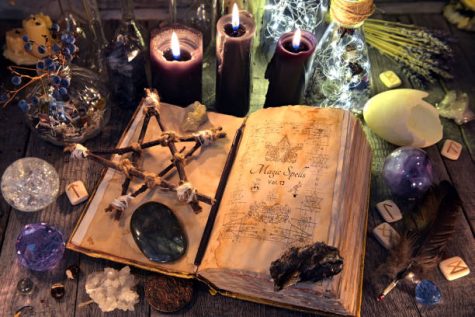 Paganism and Witchcraft are becoming more popular with young people, as they reach for something to anchor them in a messy, often scary world. This is reflective of a larger cultural movement among young people away from traditional, Christian-influenced values, and towards a more individualistic, liberated approach to living.

Walking through the school halls, there’s a good chance that you’ve met a witch, without even knowing it. Many teenagers are choosing to become witches or pagans. “I work with biblical angels,” says one pagan student. Another shared an anecdote about setting up an altar to a god, saying, “As soon as I finished setting it up, a bug associated with the god just, appeared in my room.”

Paganism and witchcraft are often confused with each other, and with the religion of Wicca, but each is a distinct, separate practice. Here is a brief definition of each:

Wicca is one of the newest religions, created by Gerald Gardner in the 1950s. Wiccans believe in a God and a Goddess, and may practice magic alongside their religion, but magic is not essential to the religion.
Paganism is also a religion, but pagans may worship deities from different pantheons from around the world, using mythology as a guide. Some focus on one pantheon, or family of deities from a specific culture, while others worship deities from many different pantheons. pagans also may practice magic, but it is not essential to the religion.
Witchcraft is the practice of performing magic, or using objects, words, and energy to affect a desired result. It may be practiced in tandem with any religion, but is not a religion in itself.

Witchcraft and Paganism have been on the rise among young people. One teenage witch says it is because of the internet, saying, “The internet is definitely making it easier to discover this stuff.” The recent online witchcraft movement seems to have begun largely on Tumblr in the early 2000s, and the website still hosts a massive amount of witchcraft content, with hundreds of thousands, possibly millions, of posts under the “witchcraft” hashtag alone.

Today, Witchcraft and Paganism content is most visible on TikTok, with the “paganism” tag having over 400 million views. That hashtag and many others have videos where users act out skits about their deities, share spells they have done, and share tips on how to improve their magic practice. One witch I asked about the app warned me of misinformation, but conceded that, “TikTok definitely has more of a sense of community than like, a book will give you.”

When asked about why young people are drawn to Witchcraft and Paganism, a witch I spoke to remarked, “A lot of people get into it because of religious trauma.” Paganism allows you to craft a religious practice that fits yourself, cultivating a deeply personal relationship with the divine. To a teen traumatized by an organized religion, this freedom can be very healing.

Witchcraft can have political implications as well. Some witches cast spells to protect Black Lives Matter protestors from the police. A group of young witches created the “Hex Trump” movement during the Trump presidency, which invited magic practitioners to cast spells on the president to limit his ability to harm vulnerable groups.

To a generation searching for identity and control in a turbulent world, Witchcraft and Paganism can be a tool for change and empowerment. One witch described their favorite money spell to me, saying, “The whole ‘bay leaf in your wallet’ thing has never failed me. My wallet is never empty now.”

Regardless of whether you believe in magic or not, seeing the situation this generation is facing, it’s no wonder that they reach towards witchcraft for more power over their lives, or to ancient deities for comfort.