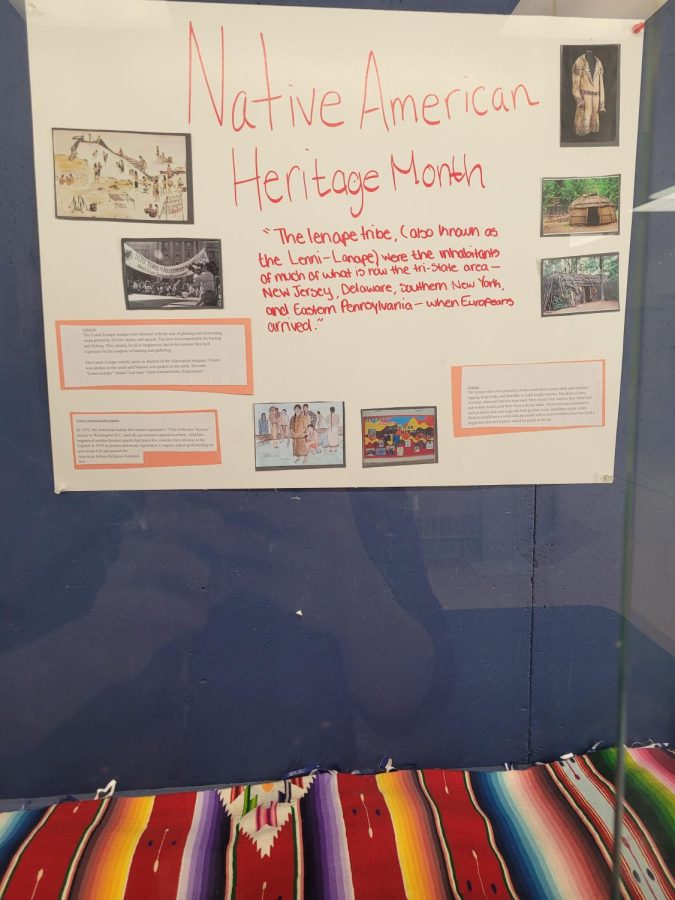 In addition to daily announcements infomring students of important Native Americans and their accomplishments a display case was designed to highlight the contributions of a New Jersey tribe, Lenni Lenape.

North America has a rich decadent history of the Indigenous people who made a mark on the land, but magnificent mark deserves more attention, and that’s what is anticipated through the national event of Native American Heritage month.
The event’s purpose is to combat people’s lack of knowledge and exposure to the culture, so that the attributes of the various and distinct groups can become well known by all of us. In our context more specifically, the purpose of this activity is to honor and bring awareness to Indigenous tribes and highlight their culture to students here at Ewing High School.
Initially, President Bush declared November as Native American Heritage month, back in 1990, and President Clinton then officially issued it 1994.
But the move to make this started was with Arthur Parker, a Seneca Indian who was a museum director in Rochester New York and a notable Native American proponent. But the interest and care for it is a relatively new phenomenon, and Native American culture has only recently been getting the recognition it deserves.
This event takes place across all of United States, in schools, workplaces, and represented in communal activities celebrating native american beauty. This will definitely be an ongoing project, and a climb in Native Indian appreciation is expected and confidently projected.
This week, as we celebrate Native American Heritage Month, the individual tribes and it’s uniqueness as well as prominent Native American advocates and spokesperson will be highlighted and put on a pedestal, giving them the deserving honorary attention to Native Americans.
Lenni Lenape had a long history sitting right here in New Jersey, and had been here for more than 10,000 years, creating an abundant amount of time for them to build a unique and special culture and way of life.
Lenni Lenape are part of the bigger Northeastern Native American group of the Lenape, which literally means “the people”. In 1676, they too were part of the Iroquois Confederacy, a notorious and ancient civilized establishment of democratic government, so America owes them quite a bit of thanks and appreciation for being an important part of the American Constitution considering their own constitution directly influenced the US.
This event takes place across all of United States, in schools, workplaces, and is represented in communal activities celebrating Native American richness. In the Ewing School, notable Native American figures were given honorary mentions on the announcements and a display was made expressing the history and cultural content of the Lenape. Such efforts in representation and cultural awareness will continue to grow and is an ongoing project, and a climb in Native Indian appreciation is positively expected and hoped from this national event.